Our congratulations to member Dr Colin Harris. After 5 years of hard work the Solihull Green Man Trail is up and running (or walking)

below is a copy of the official press release. 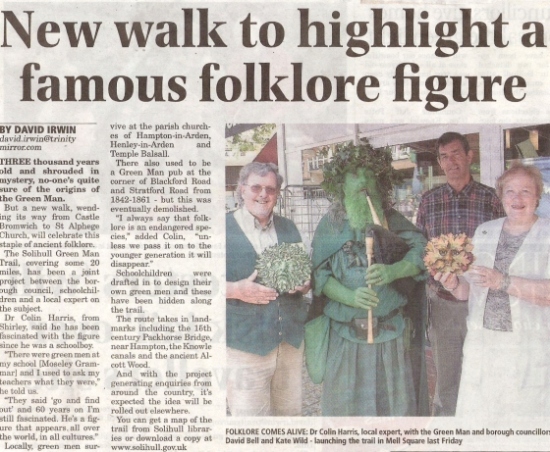 Walk this way and hunt the Green Man in Solihull

A new walk celebrating the mythical wonder of a staple creature of folklore has launched in Solihull.

The Solihull Green Man Trail runs in both directions from Castle Bromwich in the north of the borough to St Alphege Church, in Solihull town centre covering more than 20 miles.

The Trail takes its name from the historical figure of the Green Man, which has been a part of folklore for more than 3,000 years.

Solihull no longer has any Green Men in the borough, but some nearby examples do remain. There are pubs called the Green Man in Coleshill, Harborne and Kenilworth, while a Green Man pub also stood on the corner of Blackford Road and Stratford Road from 1842 – 1861. This was then renamed The George and Dragon, before being demolished. The nearest Green Men on churches are in Hampton-in-Arden, Temple Balsall and Henley-in-Arden.

However, with the launch of the new Trail, the spirit of the Green Man in Solihull is being kept alive.

With guidance from Solihull Council’s Neighbourhood Rangers, local schools from across the borough have used their artistic talent to create their own Green Men, which have been hidden along the route.

As well as hunting the Green Men, there are a number of other highlights along the route.

The Trail takes in the traditional oak woodland of Alcott Wood, the 15th century Packhorse Bridge that straddles the River Blythe near Hampton-in-Arden and part of the Grand Union Canal, as better known landmarks such as Birmingham Airport and Malvern and Brueton Parks.

Dr Colin Harris, a local expert on Green Men and other traditional features and origins of folklore, has helped pull the Trail together and is keen for others to start hunting the hidden green faces.

Dr Harris said: “The Green Men hidden on this trail are fantastic and I really hope that everyone walking the Trail has fun finding them. We need to keep alive the traditions of the Green Man because he is an endangered species and unless we pass on folklore like this to future generations it will fade into distant memories. I hope this Trail helps turn a few more people into green man-iacs like me!”

Councillor Mrs Kate Wild, Cabinet Member for Community Services, said: “This Trail takes in a great section of our wonderful borough and is a perfect way to further explore the local environment. I’m sure anyone walking the trail will find something interesting on this route, whether they are a visitor or a long-term resident.”

For more information about the Green Man Trail, download the route map or pick one up from any Solihull library. Alternatively, head to Mell Square, Solihull town centre, between 11am-3pm on Friday 27 July for the walk’s official launch.

Spot the Green Men and win!

Dr Harris is offering a prize of £25, plus a £25 donation to charity of the winner’s choice, to the first person who sends in photographs of all the Green Men in their hiding places. Images should be sent to enquiries@greenmanforum.co.uk.

This entry was posted on Aug 5, 2012 by Chris Walton. It was filed under Green Man miscellaneous and was tagged with Green, green man. solihull, Man, solihull, trail.