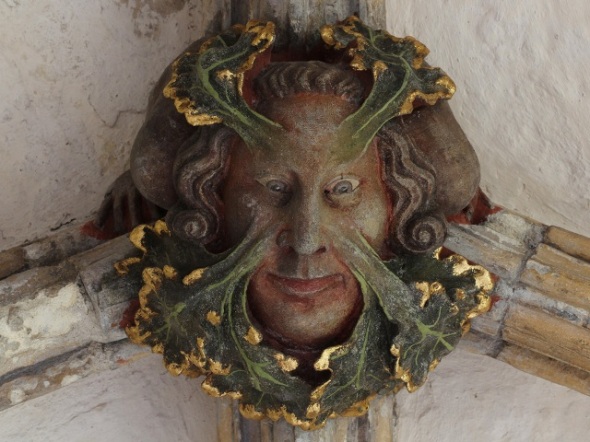 Many thanks to Jennie Miller & Gary Truss who sent us some fantastic pictures of the wonderful Green Men in Norwich Cathedral. Norwich Cathedral has over a thousand roof bosses, more than any other cathedral in Christendom. They form an incredible and unrivalled collection of late medieval sculpture depicting Bible stories, the lives of the saints, fearsome grotesques and of course a wonderful abundance of Green Men.

Many of the bosses are ‘stone snapshots’ of the Mystery Plays that paraded through the streets of Norwich in medieval times. Much humour is exhibited in the carvings with bishops and popes falling into the mouth of hell and washerwomen scolding knavish thieves. Craftsmen, Musicians and fine ladies people the vaulting alongside acrobats and dragons, angels and unicorns.

The foundation stone of Norwich cathedral was laid in 1096 by Bishop Herbert at the very east end of the building. A significant Saxon settlement, including two churches, was demolished to make way for the building. The riverside location of the Cathedral complex was deliberate. A lack of local stone and the inaccessibility of the quarries in Northamptonshire meant that most of the stone used to construct the Cathedral was imported from Caen in Normandy. The stone was sailed up the eastern coast as far as Great Yarmouth, then up the River Wensum to a specially constructed canal which led directly into the stonemasons’ yard.

The building is in the Romanesque style, the architectural style which was widespread from the late tenth to the twelfth century

across the western church, also known in England as ‘Norman’ style. Norwich Cathedral was one of the great buildings of its time. With construction beginning in 1096 and finishing by c.1145, it was amongst the largest major churches in Europe. The Norman building was an example of that uniquely English phenomenon: a cathedral that was also a Benedictine priory – the bishop’s seat, but run by the prior and his monks.

The immense architectural importance of the Cathedral today chiefly rests on the scale of the original Romanesque building and the completeness of its survival. The four arms of the cross-shaped church and the central tower are all largely original and, unusually, the east end of the Cathedral preserves intact its ambulatory and two of its radiating chapels. Losses have been few, and later embellishments include Gothic features such as the high vaults and the spire.

The following is taken directly from Norwich Cathedrals fascinating website:

“The term ‘Green Man’ describes the image of a face which is surrounded by leaves, a familiar motif to medieval sculptors with whom foliage and heads were a popular design. It was, in particular, a carver’s device so it is unusual to find the image of the Green Man in other artwork for example stained glass or illuminated books. Despite varying greatly in design, all the representations of the Green Man depict a living being in the middle of the young, green buds of spring or the crisp, browning leaves of autumn.

On some Green Men the foliage may spring directly from the mouth or other parts of the face and some of these branches may bear fruit or flowers. The Green Men found in Norwich Cathedral are in the style known as ‘the foliate head’ which means that their faces merge imperceptibly into foliage.

Although commonly termed the ‘Green Man’, the original name of this strange figure remains unknown. There are hundreds of Green Men across the country with different features and portraying different emotions, such as fear, humour or tranquillity. The Green Man can be found in bench-ends, misericords and on the capitals of columns; however they are most commonly found on roof bosses. They would have been carved either on location, which involved masons working in restricted positions on elevated wooden scaffolding or in the masons’ lodges, especially in winter when the wet and cold weather did not permit the masons to lay courses of stonework.

The abundance of versions of the Green Man in medieval buildings attests to the ongoing significance of natural imagery in the religious life of the period. The original meaning surrounding the Green Man, probably that of rebirth in springtime, has been lost across the centuries but the image has remained popular.”

Although I have seen pictures of Norwich Cathedral’s green men in books and pictures many times over the years I haven’t as yet had the chance to view them in the flesh, but Karen’s wonderful pictures and the fascinating information I have found out about Norwich Cathedrals history have inspired me to ensure that a visit to Norwich is a must. 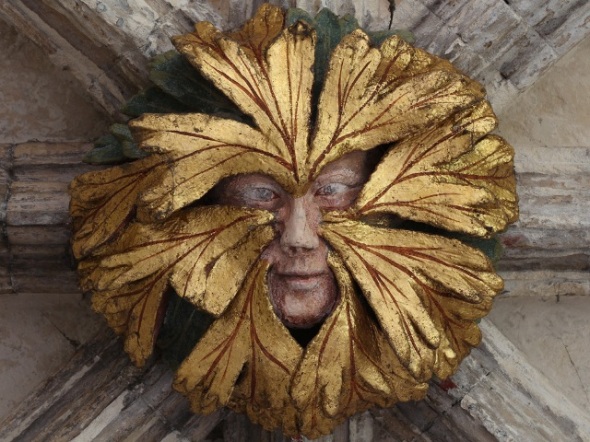 This entry was posted on Sep 21, 2013 by Chris Walton. It was filed under Green Man Sightings .