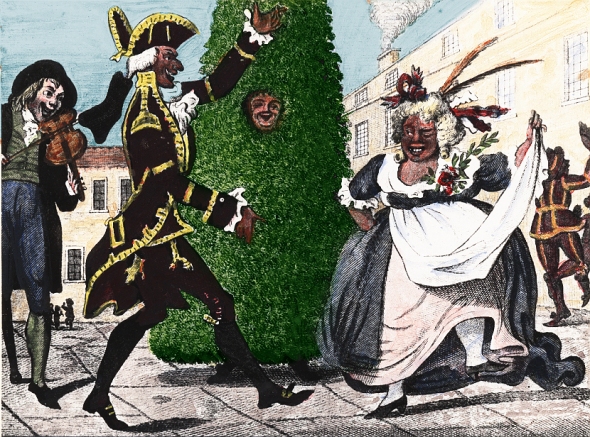 Each month I publish a  newspaper article that featured the traditional Jack-in-the-Green along with a picture or photograph from the archive. Each of these articles is a fascinating window into a bygone era. For more information about the Jack in the Green both current and historical visit our main website at: www.thecompanyofthegreenman.co.uk

Yesterday there was scarcely any room in London for that ingenious class of persons who, under the general designation of “Sweeps,” contrive to make a holiday of the first of May, and to levy contributions on the public. Chimney sweeping by machinery was a sad blow to the festivities of May-day, and although there were yesterday some specimens of Jack-in-the-Green, with his attendant satellites, they were, as a rule, only to be found in retired districts which formed no part of the road to the Great Exhibition, and were but very feeble representatives of the sweeps of bygone years. In the neighbourhood of Brompton and Kensington a few appeared but the thoughts of the people seemed bent on the Exhibition, and the sooty fraternity – always, by the way scrupulously clean on May-day – seemed to meet with very little encouragement. Many foreigners who came into contact with the moveable Jacks-in-the-Green, appeared to be profoundly astonished at the wonderful system by which such apparently lifeless bodies could have had such wonderful activity imparted to them, and upon the principle of Omne ignotum pro magnifico, rewarded to some extent the ladies and gentlemen who politely extended the familiar long-handed spoons, in which they are accustomed to receive their favours. Jack is supposed to have three days’ holiday at this time of year, and it might be hoped for his sake, that as to-day and to-morrow will be less exciting days than this has been, he may reap a bountiful harvest before the week has drawn to a close.