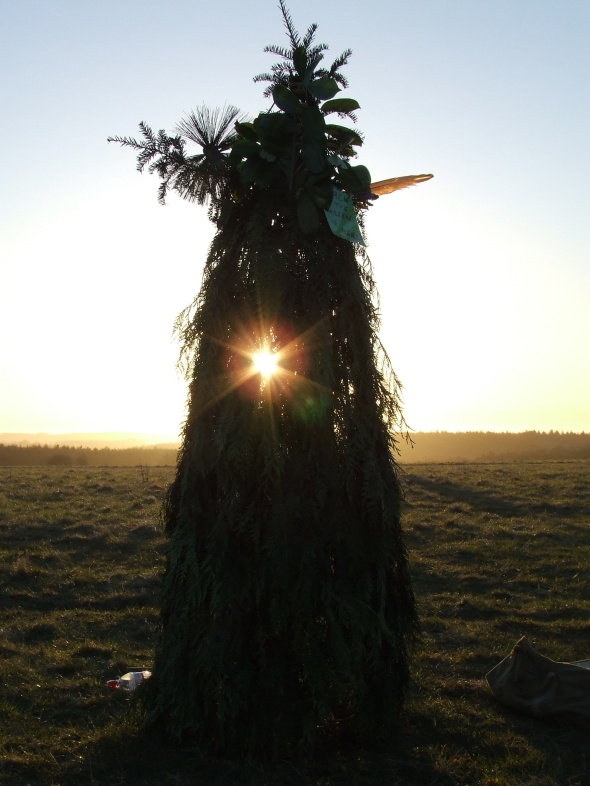 The traditional Jack-in-the-Green is beginning to awake again across the country.

The Jack-in-the-Green was (and indeed is) a traditional participant in May celebrations and May Day parades. A large framework is covered in combinations of foliage and flowers and is often topped with an intricate crown of flowers. The Jack then parades or dances, often accompanied by attendants called Bogies as well as Morris Dancers, musicians and assorted unusual characters. If you would like to know more about the history of the Traditional Jack-in-the-Green click HERE

Below are the most up to date details of this years confirmed events. By my reckoning 2016 could see 15 or more Jacks parading! Don’t miss out on this wonderful and magical annual tradition, go out and support your nearest Jack and please send us in your pictures and experiences of the event to share with others. If you get the chance to forward me pictures of a Jack live from an event I will endeavour to post them here as quickly as possible to share with our members around the world. The e-mail address to send any pictures to can be found HERE

Please do get in touch if you would like to add or amend details to any of the events listed here or if you know of any Jacks I have missed. Up to date details are regularly posted on our Annual Events Page HERE

Highworth in Wiltshire celebrated it’s 800th anniversary in 2006 with a Jack-in-the-Green and the Jack is now an annual tradition as part of the May Market. The Highworth Jack-in-the-Green parades each year through the streets of Highworth with the Bang to Rites Drummers. The procession will depart from the rear of the Saracens Head pub around 10:30 going along Brewery Street, London Road, High Street & then Into the Market Square for 11:30 when the maypole dancing will take place. The procession will then leave Market Square via Vicarage lane then continue along: Lechlade Road, Turnpike Road, Cherry Orchard Lane, Cherry Orchard, High Street & Brewery Street returning to the Market Square around 13:00 to raise & release the energy from the Jack and distribution of the greenery.

Known as The Guildford Bush, this Jack was revived by the Pilgrim Morris Men in 1979 and is built from Laurel. For many years the Jack was carried by folklorist  George Frampton.
Commencing at 10am outside Holy Trinity Church on the High Street the Jack processes with the Pilgrim Morris Men to Castle Green where the Maypole is erected and the dancing involving guest Morris sides begins. 2016 marks the 40th Summerpole.

Guildford Jack in the Green

Hever Castle will have their own Jack-in-the-Green and Green Man over the bank holiday weekend. “Join the Lord and Lady of the May on the Castle forecourt and see the crowning of the May Queen then dance around the Maypole and take part in May Day dancing accompanied by 16th century music. Meet the mythical Jack-in-the-Green and follow the Green Man from folklore in a customary May Day procession through the gardens as he wakes up the plants for summer with the help of children and their magical May bells. Children can also enjoy a Green Man Trail through the Castle to find out more about his origins”

Hever Castle Jack in the Green

The Rochester Jack was revived in 1981 by Gordon Newton and Boughton Monchelsea Morris who were inspired from accounts by Charles Dickens. Custodianship of Jack was passed to Motley Morris in 1984 who now wake Jack with various other Morris sides at dawn on May Morning (approximately 5:32am) at the Bluebell Hill picnic area, surrounded by twelve bonfires.  Jack is paraded through the streets of Rochester usually on the bank holiday Monday as part of the Sweeps Festival.

The Oxford Jack is usually first seen near Magdalen Tower just before 6am and leads an informal procession up ‘The High’ to Radcliffe Square, where the first dance of the day: “Bonny Green” from Bucknell, starts at about 6.25am. OUMM (Oxford University Morris Men) introduced Jack-in-the-Green to their May Morning festivities in 1951. At that time they were unaware that a Jack-in-the-Green was a common sight in and around Oxford in the 19th century.

Oxford Jack in the Green

The Winchcombe (Gloucestershire) Jack was revived on August 31st 2009 as part of “Marking the Year.” A Jack was recorded as visiting a local school by Emma Dent of Sudeley Castle in the 1890’s. The Jack was then resurrected for May Day 2010 and a local May bank holiday village fete and is now awoken  every year at dawn (5:20am) on May Day up on Cleeve Hill by Happenstance Border Morris. The Winchcombe Jack appears at various events over the following  days.

The Fowlers Troop and the Deptford Jack in the Green go out on the streets of South East London or the City of London every May Day. Jack will probably be dressed at the Dog and Bell on Saturday 30th April and will process from there around Deptford and Greenwich on Sunday May 1st.
The Fowlers Troop Jack was revived in the early 1980’s by members of the Blackheath Morris Men and friends. It is a revival of a Jack in the Green from about 1900 which was paraded by the original Fowlers Troop. In 1983 Mo Johnson made a Jack-in-the-Green in the back garden of the ‘Dog and Bell’ and Blackheath Morris (a side morphed from the Blackheath Foot’n’Death Men who used to dance at events featuring bands like Hawkwind and the Pink Fairies) revived the Deptford (Fowlers Troop) Jack. Mo was inspired by one of Thankful Sturdee’s photographs c.1900 of the original troop and Jack.

Deptford Jack in the Green

The Cheltenham Sweep’s Jack was revived in 2014 and will be in Cheltenham on Sunday 1st May starting on The Promenade in Cheltenham at 11.30 a.m. outside Waterstones bookshop or under the awning of Cavendish House Store if wet.

The Hastings Traditional Jack-in-the-Green was revived by Keith Leech in 1983 and is now one of the biggest annual gatherings of Morris Dancers in the country.  The Gathering will begin at 9:45am this year and Jack will be “released” from the Fisherman’s Museum on Rock-a-Nore Road at approximately 10:15am . Jack is released in a wonderful, magical ceremony and is central to the festival and the parade. At the end of the day (3:30pm) Jack is slain to release the spirit of summer. The festival takes place over the whole bank holiday weekend.

Jack-in-the-Green is now central to the Whitstable May Day celebrations. The Jack is supported by Oyster Morris who also have their own Green Man who combines the roles of Jester and announcer dressed in white and green. Jack is also  accompanied by two attendants dressed as Robin Hood and Maid Marian. The Jack-in-the-Green was revived for the Whitstable Folk Festival in 1976. Dixie Lee, one of the original organisers said in 1992 “ At the time it just seemed like the Jack was looking for a reason to come out again, and I must say that every year when Jack makes his appearance on the street I get such a feeling of power from him that I know it was the right thing to do”

Whitstable Jack in the Green

Ilfracombe Jack in the Green

Bristol Jack in the Green (Saturday 7th May)

The Bristol Jack in the Green appears on the first Saturday in May starting from the historic Harbourside (outside the M Shed) at 10:30am and leads a magical procession through the streets of Bristol eventually ending the day on Horfield Common at approximately 4pm where he dies to release the spirit of summer. A Jack-in-the-Green was recorded in Bristol around 1865 by a lady who remembered seeing him with a sweep and a queen on the outskirts. The revived Bristol Jack in the Green is a descendant of the Hastings Jack.

Bristol Jack in the Green

Knutsford May Day and Jack-in-the-Green (Saturday 7th May)

The Knutsford Jack in the Green is probably the oldest continual annual Jack in the Green. Apart from the war years it has paraded almost every year since 1889.  May Day in Knutsford is celebrated over the May Bank holiday weekend. The person who plays Jack is chosen each year and is now played by a  youngster rather than an adult as it used to be.

Knutsford Jack in the Green

The Yaxley Jack-in-the-Green started in 2013 and lead the Yaxley May parade. He was accompanied by Sap-Engro and Copperface as well as an attendant wearing the original Ancient Order of the Foresters sash, worn in the village’s parades in the nineteenth and early twentieth century and a host of boggarts – the mischievous imps of Fenland lore. This is now a bi-annual event. Jack will walk on May 14th this year.

Brentham has a big celebration every May which includes a Jack in the Green described as a walking talking bush who sometimes parades barefoot. Brentham’s May Day tradition became established in 1919 after the end of the First World War and expanded considerably for 1921 when the first Jack-in-the-Green appeared.

Brentham Jack in the Green