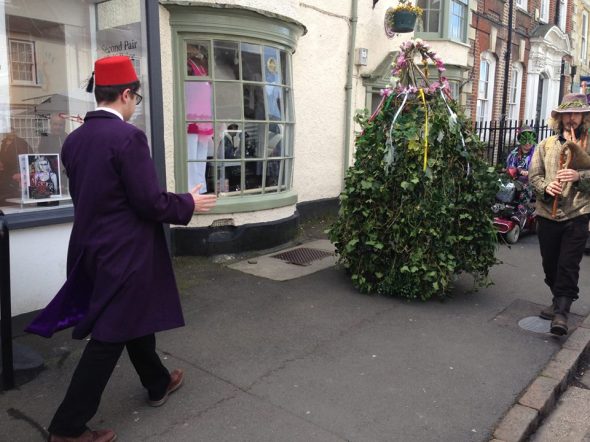 My thanks to Terry Portsmith for permission to use the picture above of this years Highworth Jack-in-the-Green, and my thanks to Paul Baskerville of the Bang to Rites Drummers for sourcing it for us.

The Highworth Jack in the Green was started in 2006 when the Wiltshire town celebrated the 800th anniversary of it’s market charter on 22nd April 2006. The Highworth Jack in the Green is now an annual tradition as part of the annual May Market. The Jack is accompanied by the Bang to Rites Drummers a group of community based performance drummers, based around the borders of Wiltshire, Oxfordshire & Gloucestershire who formed in the summer of 2013.

It has long been my hope to be able to obtain at least one picture of every Jack that goes out across the UK (and beyond) each year to add to our online Flickr archive and provide a visual record of this wonderful tradition for generations to come. At least twenty one Jacks went out this year and I’m extremely grateful to everyone who has helped me to gather pictures of thirteen Jacks so far.

I’m still trying to track down pictures of eight Jacks from this year. If you can help and have the copyright owners permission please get in contact via the ‘Contact us’ tab at the top of this blog. Copyright of any pictures added to our archive always remains with the original photographer and pictures are only ever used with permission of the copyright owner.

The eight Jacks I’m still looking for pictures of from 2016 are:

If you haven’t seen a Jack-in-the-Green yet this year there is still at least one more to come. The Carshalton Straw Jack is a celebration of Harvest that takes place in September each year. The straw Jack is ritually stripped in the evening so that all present can take a keepsake and then he is burnt in a brazier. It is hoped that he will be burnt as a complete figure one year. The date for this event is still to be confirmed but you can visit the website here: Carshalton Straw Jack