Bristol Jack in the Green 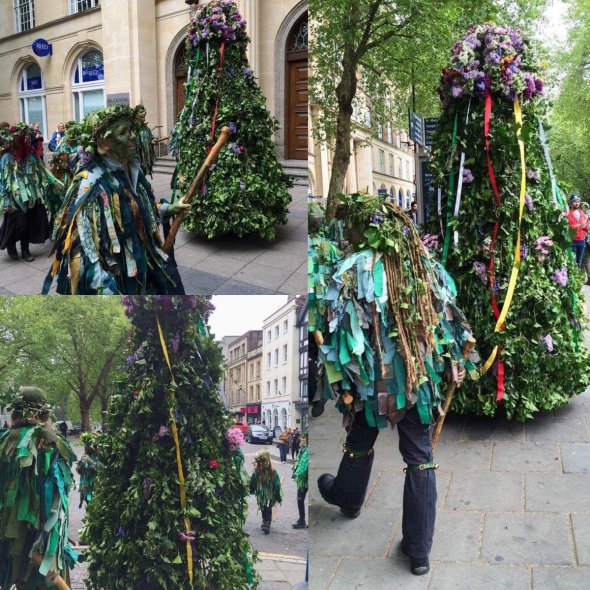 I’m delighted to report that the magical Bristol Jack-in-the-Green paraded through the highways and byways of Bristol spreading joy and Jacks magic in equal measure.

My thanks to Roger Hinchliffe @cow_photography for permission to use his fantastic pictures.

The Bristol Jack in the Green was revived by Pigsty Morris in 1992 and is a scion of the Hastings Traditional Jack. The Bristol Jack appears on the first Saturday in May starting from the historic harbourside (outside the M Shed). Jack is “awoken” by his green clad attendants in an evocative ceremony on the harbourside and then leads a magical six hour procession through the streets of Bristol. The Bristol Jack is nine feet tall and is top with a crown of flowers, he can be difficult to control, his attendants often have to keep him from chasing members of the public. Jacks attendants distribute Jacks magic (often mistaken for green face paint) amongst those watching him along the route. The Bristol Jack in the Green’s route varies slightly each year but he normally passes through St Nicholas Market where he dances before pausing for a well earned pint at The Crown. The day always ends on Horfield Common where large crowds gather to witness the slaying of Jack  to release the spirit of summer. Jacks leaves are then distributed to the watching crowd. In 1861, the Western Daily Press reported that: “Throughout the city and Clifton there was the usual visitation of Royalty – perhaps a more plentiful crop of Kings and Queens than in former years – and Jack in the Green, with a band of music and a cohort of gaily dressed fraternal spirits, paraded the thoroughfares and drew much attention.” A Jack-in-the-Green was also recorded in Bristol around 1865 by a lady who remembered seeing him with a sweep and a queen on the outskirts.

Knutsford Jack in the Green

I am hearing rumours that the Knutsford Royal May Day Jack-in-the-Green was seen out and about yesterday. I would love to receive confirmation of these rumours and a picture of this years Jack-in-the-Green if possible please.

The Knutsford Jack in the Green is probably the oldest continual annual Jack in the Green. Apart from the war years and one recent year it has paraded every year since 1889. May Day in Knutsford (Cheshire) is celebrated over the May Bank holiday weekend. The main focus is the May Queen. The person who plays Jack is chosen each year and is now played by a  youngster rather than an adult as it used to be. The Knutsford Jack was not one of the early Jacks but like many others in the late 19th Century was a much tamed Victorian revival having first appeared in May 1864 “based on earlier traditions and festivities” by the Rev. Robert Clowes the Vicar of Knutsford.