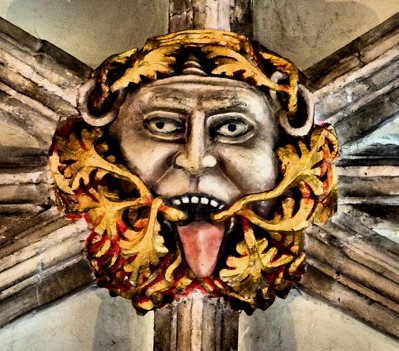 Crowland Abbey was a monastery of the Benedictine Order in Lincolnshire, It was founded in memory of St. Guthlac early in the eighth century by Ethelbald, King of Mercia, but was entirely destroyed and the community slaughtered by the Danes in 866.

Re founded in the reign of King Edred, it was destroyed by fire in 1091, but rebuilt about twenty years later by Abbot Joffrid. In 1170 the greater part of the abbey and church was once more burnt down and once more rebuilt, under Abbot Edward. From this time the history of Crowland was one of growing and almost unbroken prosperity down to the time of the Dissolution. Richly endowed by royal and noble visitors to the shrine of St. Guthlac, it became one of the most opulent of East Anglian abbeys; and owing to its isolated position in the heart of the fen country, its security and peace were comparatively undisturbed during the great civil wars and other national troubles.

At the time of the Dissolution the abbot was John Welles, or Bridges, who with his twenty-seven monks subscribed to the Royal Supremacy in 1534, and five years later surrendered his house to the king. The remains of the abbey were fortified by the Royalists in 1643, and besieged and taken by Cromwell in May of that year.

This Green Man is listed in our Gazetteer

This entry was posted on Aug 25, 2018 by Chris Walton. It was filed under Uncategorized and was tagged with Green Man, greenman, sighting.