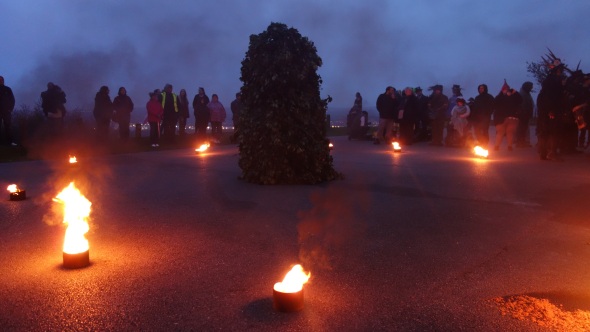 The Rochester Jack was revived in 1981 by Gordon Newton and based on accounts written by Charles Dickens in his ‘Sketches by Boz.’ The Rochester Jack-in-the-Green is brought to life during a fantastic ceremony that takes place at Dawn on May 1st at the top of Bluebell Hill each year.

Originally revived by Boughton Monchelsea Morris, custodianship of Jack was passed to Motley Morris in 1984 who now Wake Jack with various other Morris sides at dawn on May Morning (approximately 5:32am) at the Bluebell Hill picnic area surrounded by twelve bonfires. Jack is also paraded through the streets of Rochester by Motley Morris usually on the bank holiday Monday as part of the very popular three day Sweeps Festival. An article in the Chatham and Rochester Observer in 1932 states that ” Sixty years ago (the 1870’s) it was not considered May Day if we had not seen at least three Jacks-in-the-Green and their attendants from Rochester and Chatham.”

Jack in the Green by Martin Graebe

Now Jack in the green is a very strange man
Though he dies every autumn, he’s born every spring
And every year on his birthday, we will dance through the streets
And in return Jack, he will ripen our wheat (as above)

In 1981, several members of local Cotswold Morris teams decided to perform dances from the Welsh Borders on an occasional basis. They called themselves “Dartford Motley” after the town where practices were held.  The name soon changed to “Motley Morris”.

Over the coming months I will be featuring details of each of the current revived Jacks in the Green that currently parade each year.

If anyone has any corrections or further information about any of the Jacks that I feature I would love to hear from you. I would also really appreciate any photographs of any of the Jacks from any of the years they have paraded to add to our Image Archive.