It’s that time of the year when the Santa hatted green man from Salisbury Cathedral puts in his annual appearance on our blog!

Wishing all members and followers of The Company of the Green Man a Very Merry Yule. My thanks to everyone for all the contributions and support during 2019.

The next newsletter is being lovingly crafted and will hopefully be with you some time over the festive period.

Wishing all members and followers of The Company of the Green Man a Very Merry Yule. My thanks to everyone for all the contributions and support during 2018.

Here is a picture of my favourite seasonal Green Men from the roof of Salisbury Cathedral…I’m still convinced he is wearing a Santa hat!

Blacksmith Andrew Findlay kindly sent me this picture of an incredible Green Man that he crafted. Andrew wrote “One I made using blacksmithing techniques which I thought may be of interest. I became a blacksmith because the process of creating in the forge is spiritual, alchemical and elemental all at the same time. A magical experience. Using the transforming fire we shape a sterile, cold and hard material into beautiful and permanent organic forms.”

You can see more of Andrews work at http://www.andrew-findlay.com

I’m grateful to Derek Penrose for letting me know about this Green Man with a fascinating history and for sending in this wonderful picture. St Telio’s Church was  originally located at Llandeilo Tal-y-bont, Glamorgan in Wales. It was built in the late 12th century and furnished in 1530. Between 1984 and 1985 the whole church was dismantled and moved to St Fagans National History Museum.

“St Teilo’s church is believed to have been built during the late 12th or 13th century on the site of an earlier Celtic church. Over the ensuing centuries the building was altered and extended.

The oldest parts of the present structure are the nave and chancel. During the 14th century, small chapels were built onto the north and south sides of the chancel, and during the late 14th or early 15th century the church’s capacity was increased by the addition of an aisle to the south side of the nave. The old south wall was replaced by two arches, with a third arch opening into the chancel, and finally, a porch was added to the entrance door leading into the south aisle of the church.

The roof timbers are of typical early fifteenth century design (arch-braced collar-beams), though they may in fact be slightly later in date. The west wall of the nave was altered in the early 18th century (datestone 1736) and in 1810 the interior was furnished with box pews and a three-decker pulpit. Most of the stone-mullioned windows appear to have been blocked up at this time, and were replaced by new ‘Georgian gothic’ lancet-shaped windows. One original two-light stone-mullioned window (14/15th) survived in the south aisle. Probably the oldest surviving feature of the church is the stone font which is believed to date from the 13th century or earlier.

St Teilo’s church has been refurbished as it may have appeared about the year 1530, complete with all the elements associated with a late medieval Catholic church, including a rood screen and loft (between the nave and chancel), altars, carvings and brightly-coloured paintings on all the walls.”

You can find more information about St Telio’s Church and all of the wonderful Historical Buildings at St Fagans National History Museum here: https://museum.wales/stfagans/

My thanks to Vanessa Piggott for sending in this picture of a cast iron Green Man on a sideboard she discovered in St Mary’s Museum on the Scilly Isles. The sideboard is from the wreck of the Thomas W. Lawson a seven-masted, steel-hulled schooner used to haul coal and oil along the East Coast of the United States. She was launched in 1902 and holds the distinction of being the largest schooner and largest sailing vessel without an auxiliary engine ever built. The Thomas W. Lawson was destroyed off the uninhabited island of Annet, in the Isles of Scilly, in a storm on December 14, 1907, killing all but two of her eighteen crew and a harbor pilot already aboard. Her cargo of 58,000 barrels of light paraffin oil caused perhaps the first large marine oil spill in history.

Wishing all members of The Company of the Green Man and all visitors to our blog a fantastic Yuletide Season. (And yes it is a real Green Man – No photoshopping!) 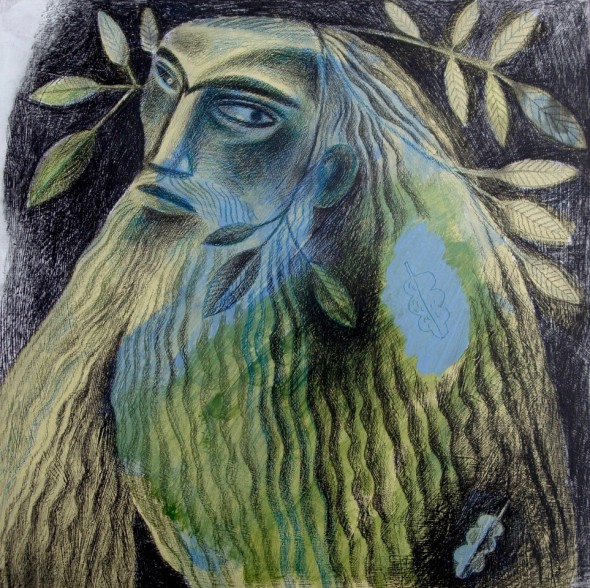 Crown of Leaves. Gouache and pencil on gessoed board. © Clive Hicks-Jenkins

Gawain and the Green Knight: Clive Hicks-Jenkins and the Penfold Press

In collaboration with Dan Bugg of Penfold Press, Clive Hicks-Jenkins is devising a series of fourteen prints based on the medieval verse drama, Sir Gawain and the Green Knight – a classic vividly translated for the 21st century by Simon Armitage. The exhibition will present the first seven prints, marking the half-way stage in this major project, together with paintings and drawings on the theme.

“The story is the kind you might find in The Mabinogion. Sir Gawain is more human than your average legendary hero. Having taken up the challenge offered at the Camelot Christmas feast by the terrifying Green Knight, he embarks on a quest to find this ogre, only to be tested – and found wanting – in unexpected ways. Sir Gawain is both a glittering knight and a fallible young man, and it is this flawed human character that intrigues Clive. Each print is inspired by the text and rooted stylistically in its world, but beyond that Clive and Dan have allowed their imagination free rein.”

You can find more information on Clive’s website: http://www.hicks-jenkins.com

The Green Man: A powerful image lives on – Muriel Fraser

We all know how fast and far a good tune can travel. Shortly after the haunting melody of “Lili Marleen” was heard broadcast to among German troops in WWII, it was eagerly adopted by Allied ones. And think, too, of the travels of a song which began as “God preserve Franz the Kaiser”. This lovely tune by Haydn was recycled as “Deutschland, Deutschland über alles” and eventually appeared as the hymn, “God who touches earth with beauty”.

Just as a catchy tune travels, so does a powerful image. The ornate leaf masks or foliated heads, now often called the “Green Man”, were developed by Roman artists in connection with nature gods like Dionysus and the satyrs. But this image was too good to end with Roman paganism. In the Middle Ages, as the pageants of chivalry became widespread, Green Men appear with increasing frequency in Christian churches, too.

A clue to this is offered by a ritual from 16th-century Sweden. There we find a May Day jousting contest between Winter and Summer. The idea was to dramatise — and help advance — the coming of spring. The two sides in the tournament were clothed accordingly. Duke Winter was “clad in various pelts and armed with pokers, scattering ice and snowballs to prolong the cold”. His opponent, Count Floral, was “garbed in the green boughs of trees, together with leaves and flowers”. Of course, whatever the weather on the day of the tournament, “and to everyone’s joy, the victory is awarded to Summer”. [1]

This gives us a glimpse into the mediaeval meaning of faces decked with foliage. No longer were they Roman gods, but harbingers of spring. And, of course, spring in the metaphorical sense, was a central theme in Christianity. It applied to both the rebirth of the soul in heaven and the general Resurrection of the Dead. As such, the foliated head had a firm claim to its place in Christian churches.

But the transformations didn’t end there. The Green Man could represent, not only the resurrection of the soul, but also the rebirth of the Christianity during the Reformation. This seems to be why the Reformers adopted it initially. (However, they soon backed off from this transformed satyr. After all, they were the ones who liked to accuse the Catholic Church of being “pagan”.)  But at first, presumably as a symbol of the rebirth of the church, a Green Man appears in a portrait of Martin Luther by Cranach the Elder, also on the title page of Luther’s petition to the Papal Council in 1520, and even in his church in Wittenburg. [2]

Mediaeval people loved symbols precisely because they regarded them as having magic power. This symbol is simple, vivid, and closely connected to people’s hopes and fears: to their longing for the return of the sun — to a “springtime” through resurrection — and, for some, to a new and reformed Christianity. It’s no wonder that the Green Man, in its various guises, survived for two millenia.

My thanks to Alice Nunn for these new additions to the gazetteer from The Loire in France. The disgorger above is from Place Pommeraye and the rustic chap below is from Chateau Serrant.

I’m always grateful for any new sightings, photographs or verifications for the Gazetteer and the Flickr photographic archive. Please use the contact tab above to get in touch.

Any new sightings or verifications are added to the gazetteer and the finder/verifiers name is always detailed (unless they prefer to remain anonymous).

Copyright for any pictures added to our Flickr archive always remains with the original photographer as does full control over how the pictures are used. I will never use anybody’s images for any commercial use without full written permission. occasionally I get requests to use pictures for books, magazines etc. and these requests are passed directly on to the original photographer so that they can benefit from their own work. 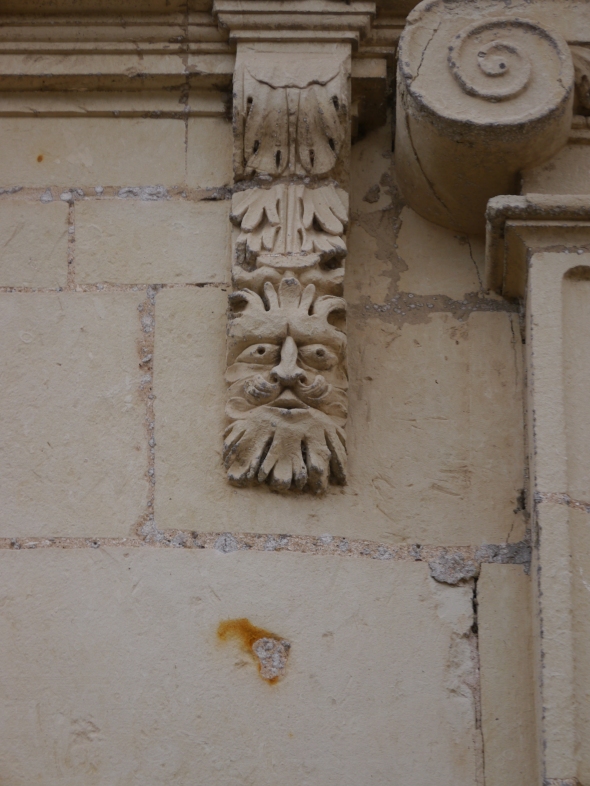 During a recent holiday on Dartmoor in Devon a little bit of Green Man hunting took place. This remarkable disgorging roof boss was discovered in the 15th century church of St Michael at Ilsington.

A number of intriguingly moustachioed bosses tried to distract and confuse us. But finally there he was peering down from on high to add as a completely new entry to the gazetteer. Always a great feeling when a previously unreported green man appears out of the gloom of a church ceiling.

More pictures are available in our Flickr archive HERE